I cooked up a batch of One Pot Hamburger Cabbage Soup because I had gone to our local grocery store that I don’t normally go to, and they had a great head of cabbage. This pandemic has caused our family to have some quirky changes in our dinners. I live really rural and we now only have 2 grocery stores, one of which is Walmart. Well Walmart is just not a fun experience right now, so off to the smaller local grocery store I go.

I had this head of cabbage, but needed a meal to incorporate it. We had stocked up on hamburger because of the meat packing plants having to close, thus prices had skyrocketed. We purchased as cheap as we could find in bulk so it would last for a while. Viola Cabbage and Hamburger soup.

One trick I have found for soup or stews that are hamburger based, is that you can use Chicken Broth instead of beef broth and it often tastes better. I’m personally not fond of a beef taste for my broth unless it’s an Au jus type dish. With the One Pot Hamburger Cabbage Soup the chicken broth mixed with the crushed tomato gave a smooth rich taste. That combo doesn’t make it obvious that it’s chicken broth.

One of the goals with this soup was to do a One Pot soup, so I lessened the dirty dishes I used. I used a similar saucepan to this 6 quart one and I prefer wooden spoons when I make soup. It really was easy to make and I felt great making such a healthy meal for my family.

Cabbage acts a bit like a noodle and works well for those that need to avoid gluten or carbs. It cooks down, so if you cut in long strips it tricks your brain into thinking it’s pasta. Shredded Parmesan was the topping I used to perfect the dish when I served it. 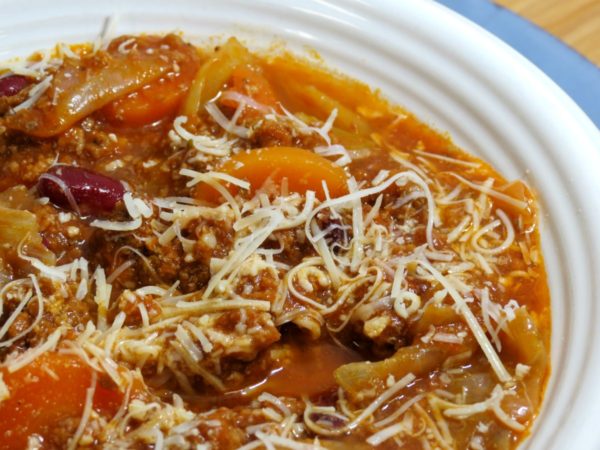