I recently made Slow Cooker Beans with Ham. With the Pandemic, Thanksgiving didn’t include many family members so our menu needed less food. Because of this I didn’t want to make a huge Turkey in the oven. Instead baking a honey baked ham. Had a nice ham bone left. Froze it and pulled it out later to make this meal. You can use a ham bone, ham shank or ham hock. They will all leave a great flavor for your dish.

As long as you use canned beans you can use just about any you wish. I chose 2 that were red, 1 that was whitish and one can of kidney beans. Giving it a nice colorful look for dish appeal. I tend to mostly use canned beans because they are easier, I don’t have to plan far ahead and thus I’m more apt to make the meal. When I use bagged I know I have to prepare ahead of time as current research shows that dry beans in the slow cooker need to be soaked and often boiled ahead and Kidney beans aren’t safe at all due to the amount of phytohaemagglutinin (Kidney Bean Lectin) that needs to be broken down.

Packaged diced ham has a pleasant flavor and looks great in your Slow Cooker Beans with Ham. After 4 hours the ham on your ham bone will have lost color and some flavor so I always switch them out at the end. I don’t add Salt until that ham bone is removed because it tends to add a lot of salt (since precooked ham is quite salty) so I don’t want to over salt and not be able to fix it. Tasting before adding it is a better choice.

To put this together I used a Slow Cooker, can opener, cutting board, Knife, measuring cup/spoons and wooden spoons. 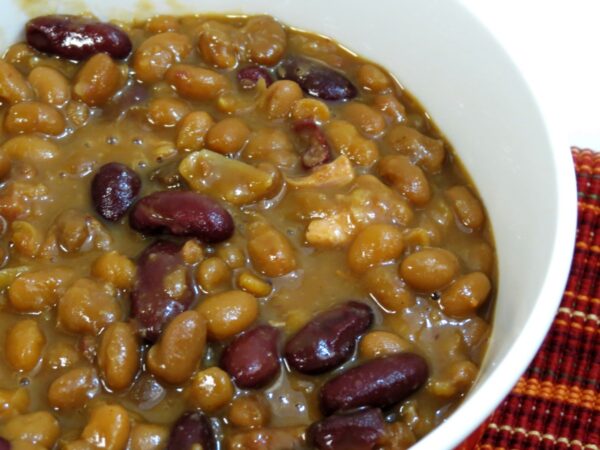