I decided to make a big batch of Slow Cooker Refried Beans because I’ve been making burritos quite often for my son during this extended home time. I’m wanting to cook more food by scratch and less reliance on pre-made foods so decided to make a batch. Picked up a bag of dry pinto beans and got to work.

I did the quick boil method with these instead of soaking overnight because I just didn’t get to prepping them the night before. Right after Church I placed the pinto beans, 4 cups of chicken broth and 2 cups of water in the saucepan and started them boiling. You’ll want to be sure to stir them quite often to make sure they don’t run out of fluid. If you need to add more water, that’s okay. If you want to make them vegetarian, just use only water or vegetable broth instead of chicken broth. After an hour and a half of boiling they were ready to go into the Slow Cooker.

You want to keep all the broth because it’s going to be extra tasty, so pour everything into the slow cooker. Saute’d the veggies before adding them and let them cook in the slow cooker. If you wanted to add dairy to the beans you would add it near the end of the cooking. I let the slow cooker warm up for about 2 hours on high and then after stirring several times I left the lid just slightly ajar so steam could escape easier (cooker still on high). We want most of the fluid to steam itself out. After 4 hours on high they were ready.

I used my immersion blender to mash them from pinto beans to refried beans. They easily are mashed and then fluffed up with the air as you continue to mix them. I LOVE the immersion blender so much because it’s so much easier to clean up vs a regular blender. Who wants to scrape out refried beans in a blender?

You can also use this Slow Cooker Refried Beans recipe for Black Beans, Navy Beans and White Northern Beans too. The Quick Soak is a good way to use dry beans in other recipes. You might even find recipes that cook long enough that some dry beans work just fine without soaking. Just remember that the Kidney beans HAVE to be either boiled or soaked as they have phytohaemagglutinin which can make you extremely sick if you don’t break that down first. I personally chose the quick soak with the chicken broth because I knew it would add to the flavor.

I estimated the servings for this recipe. Since you don’t necessarily eat the beans by themselves there was no good way to decide how much is a serving. I used a couple of cups in my burrito meal, had about 2 cups for another meal and another 2 cups that I put in the freezer. Also for the time taken to cook I included the stove top time. Hour and a half on the stove. 4 hours in the crock on high or 6 hours on low. Same slow cooker time if you soak the night before. If your aiming for no soak method, add an additional 1-2 hours per time to the slow cooker time.

I used a strainer, Saucepan, Frying Pan, Wooden Spoons, Slow Cooker, Mixing Bowl and Immersion Blender. This recipe can be doubled and with some quart size freezer ziploc bags, it can be frozen after as well. Just mash flat to close, push out as much air as possible and lay flat in the freezer. 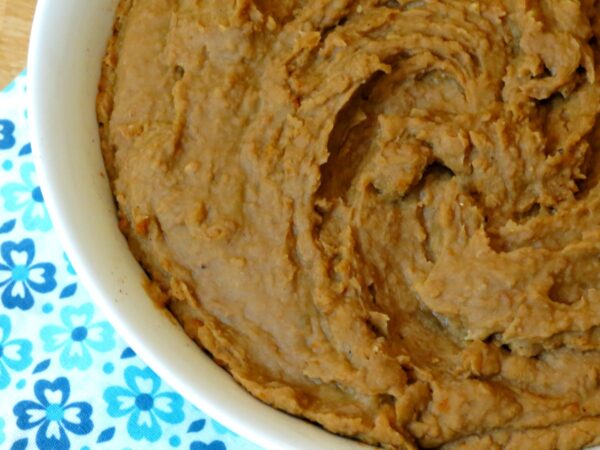