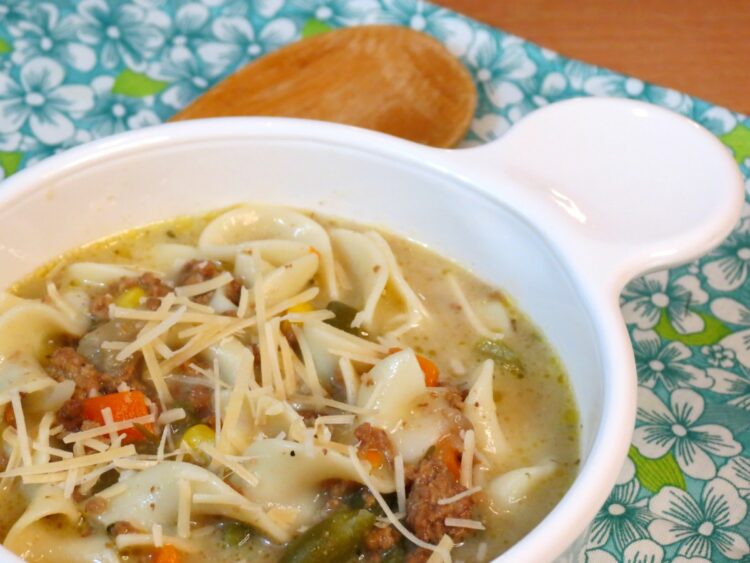 I made up a batch of Slow Cooker Creamy Hamburger Soup on a stormy day. Hadn’t had soup much in the summer, but the weather is getting colder so it’s time to break out the soup recipes. Fall is here! My favorite thing about this recipe is how creamy it is. It seems like an odd combination of Cream of Chicken with Hamburger but it works. You can also use Cream of Celery and Cream of Onion.

One of the ways this recipe is quite easy to put together is it has limited ingredients that need to be chopped. Using the frozen veggies is a simple way to add variety and color but not have to chop endlessly. We add them at the end so they keep their texture and taste better. You could also add small petite potatoes or broccoli to the soup too. Petite potatoes you would want to add in the beginning, Broccoli towards the end. It’s almost like a chicken noodle, except it’s extremely creamy instead of a thin soup, and it has hamburger.

You will need a large slow cooker, cutting board, knife, frying pan and that’s pretty much it. Nearly all of these ingredients for Slow Cooker Creamy Hamburger Soup will be found in a good frugal pantry and freezer so it’s a great recipe to use last minute. Just for an added fun I added a titch of Parmesan to my soup at the end. Don’t forget that your family will probably want crackers to eat with it too.

Tried this recipe?Let us know how it was!
1 Shares